Let’s celebrate women’s suffrage: 8 ideas to commemorate a century of voting and progress

When Justice Ruth Bader Ginsburg passed away on September 18, recalling her accomplishments on behalf of women’s rights was another poignant reminder of all women have gained — and how far we have to go.

I’ve wrapped my suffrage shirt around a pillow and put it on my office couch. The symbolic purple with yellow roses design reminds me of the women who fought for us to have the right to vote in the United States for the last century. 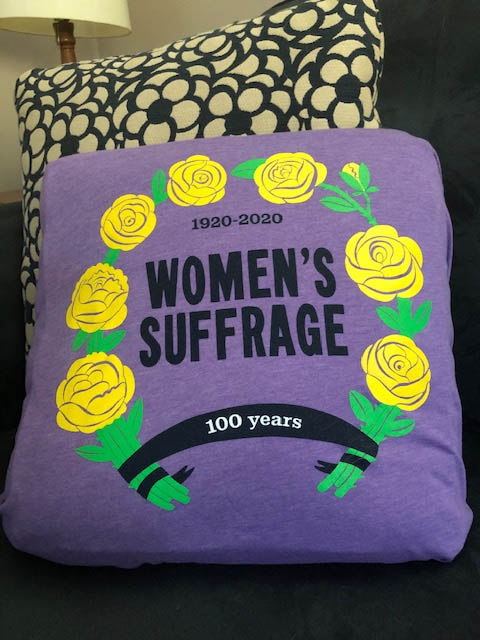 My women’s suffrage shirt wrapped around a pillow in my office.

One hundred years. That used to sound like a long time ago — but my daughter is only the third generation of girls in my family line born with the right to vote. 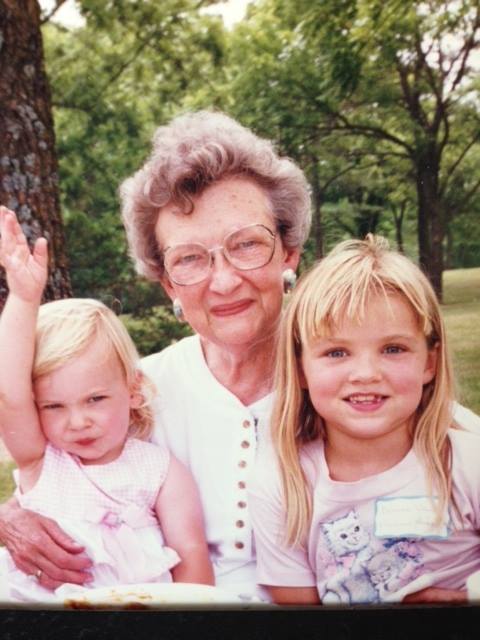 My mom, daughter and niece — the first and third generations of female voters (from 1996).

The right to vote improves our health

My mother was born just a few years after the 19th amendment was ratified (the one where we got the vote). I’m not sure if my grandmother voted, but I know she died after giving birth when my mom was a young girl. My husband’s grandmother also died in childbirth. That’s a 50% maternal mortality rate for just our grandmothers.

But wait, aren’t we supposed to be talking about women’s suffrage? Turns out, the maternal mortality rate and women’s right to vote are intertwined.

Maternal mortality rates in the United States remained very high into the 1920s, even though access to doctors increased. But in the 1930s and 40s, the number of women dying in childbirth dropped significantly. In their book, Half the Sky: Turning Oppression into Opportunity for Women Worldwide, authors Nicholas D. Kristof and Sheryl WuDunn write, “When women could vote, suddenly their lives became more important, and enfranchising women ended up providing a huge and unanticipated boost to women’s health.”

Not only did women’s value as voters help them survive childbirth, but the child mortality rate also declined 8-15% after women gained suffrage. Lawmakers began spending much more on public health as women organized, advocated and voted for change. “A growing body of evidence suggests that women place relatively greater weight on child welfare,” states a fascinating scholarly article published on the National Institutes of Health website. The bottom line is women strongly influenced public health. What’s good for the goose is good for … everybody.

August 18, 2020 was the 100th anniversary of ratifying the 19th amendment. Unfortunately, celebrating women’s suffrage on that date was overshadowed by current events. The parades and parties we might have had were not a priority as the coronavirus threatens our health and economy and heartbreaking racial injustice incidents remind us how far we have to go as a nation.

But we can still mark this important milestone in a meaningful way. Here are some ideas to celebrate women’s suffrage, honor RBG’s life work and consider what’s next for human rights.

Of course, that’s first and foremost. Vote early by mail or in person or at your precinct on November 3 — pick one!

2. Recognize the rest of the story

While Black women fought for voting rights, it took until 1965 for the Voting Rights Act to enable Black women and men to cast their ballots throughout the nation.

Honor the women who fought for our rights by doing something civic-minded you haven’t done before. Study up on local and state races on the November ballot. Contact your legislators about an issue or bill you care about. Apps, like Capitol Call and 5 Calls: Contact your Congress, make it easy.

It can feel like our country is divided between red and blue with social media as the battlefield. Try listening to both sides, even watching a different cable commentator to hear a new perspective. Be a model of respectful communication.

Pantsuit Politics podcast is a great way to get informed about politics and democracy in a “grace-filled space.”

Women have made amazing progress in the last 100 years. But equal pay and opportunities still have a long way to go. Look for certified women-owned businesses, like WriterGirl! You can buy goods and services directly from these businesses and support corporations committed to supplier diversity. By the way, I also recommend working for a women-owned business. It’s the best.

We all know smart, articulate women. Let’s elect them! From your brilliant daughter running for class president to getting equal representation in Congress — let’s get more gals in the mix.

Find inspiration from the life of Ruth Bader Ginsburg. Watch the documentary, “RBG,” or the drama, “On the Basis of Sex.” A double feature with your daughter (or niece or goddaughter) would be perfect.

8. Reminisce about the ERA

Voting is the only women’s right protected by the constitution. Once upon a time (1972), The U.S. Senate passed the Equal Rights Amendment to prohibit discrimination based on sex and sent it off to be ratified by 75% of the states. It failed. You can watch an entertaining take on why it didn’t make it with the TV series “Mrs. America.” Or ask your mother or grandmother — she’ll remember.

How will you celebrate your rights and support the rights of all citizens?

“Fight for the things that you care about. But do it in a way that will lead others to join you.” –Ruth Bader Ginsburg

About the Author: Karla Webb

Karla is a client services manager with WriterGirl. She joined the team in 2012 and adores applying her 30 years of healthcare communication experience to create content solutions. Beyond work, Karla loves a good story in any form (novels, movies, plays and conversations), and she volunteers for a variety of community organizations.