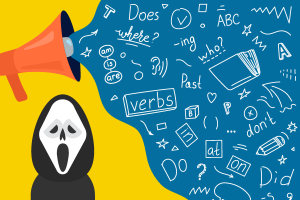 While most people are screaming at haunted houses this Halloween, at WriterGirl, something else makes us shriek. More than clowns in sewers, ghosts in attics or monsters under the bed, what scares us the most is improper grammar. Let’s talk about the top five grammatical errors that make us scream “AHHHHH” this Halloween and all year round.

1. The importance of commas.

A comma can make all the difference between writing an innocent statement or looking like a murderous cannibal. For example:

I like cooking my family and my pets. (What? Ew!)

(Note: The lack of the Oxford comma before the “and” is a conversation for another day!)

They’re, their and there are three different words. Let’s learn the difference, Halloween style:

The vampires are over there.

Their stomachs are empty.

They’re going to suck our blood.

Your and you’re mean two different things — especially if a friendly witch sends you a dinner invitation:

Apostrophes can be confusing, but should only be used in these instances:

Also, note that apostrophes should never be used with plurals (unless to show possession, of course!)

An easy way to remember the difference between affect and effect is that:

Read a similar post: I use ineffective healthcare writing techniques, and you can, too

Now that we’ve discussed the top five grammatical errors, let’s see what you’ve learned. Can you spot the errors in the Halloween invitation below?

Where: The Witch’s House

The Witch’s have a fun-filled evening planned for people of all ages. We’ll have several activities available, such as:

Theirs something for everyone at this party! Missing out will effect your life — or what’s left of it! Moohahahahahaha.

Time for a laugh

And finally, let’s end with a Halloween joke because, after all this screaming, it’s nice to have a laugh:

What’s the difference between a black cat and a comma?

The black cat has its claws at the end of its paws.

The comma is a pause at the end of a clause.

Who you gonna call?

Ready to spook away grammatical errors from your organization? Contact WriterGirl to learn how we can help!

Editor’s note: This post was originally published in October 2018. It was updated on October 5, 2022.

About the Author: Laura DiGiulio

A self-described “grammar nerd,” Laura has enjoyed writing and editing for as long as she can remember. She is passionate about healthcare content because she likes helping people understand complex medical topics. Besides being a WriterGirl, Laura loves animals (she has two dogs and a cat) and spending time with her daughter, Melanie.